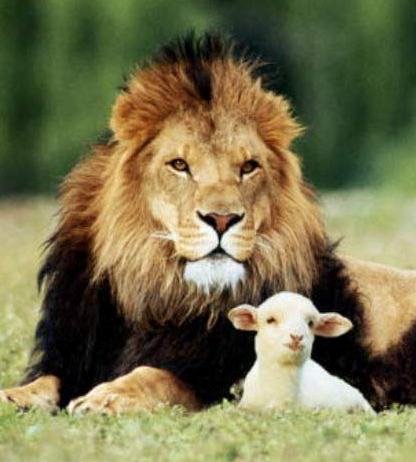 What does your mind see when you picture Jesus?

Most of us probably think of the modern depiction of Jesus we see in books and children’s literature as a handsome longhaired, light-skinned man with a beautiful beard and piercing brown eyes. But it’s doubtful he was fair-skinned., and despite supposed evidence in the shroud of Turin, nobody knows how Jesus looked.

When I served as editor-in-chief at Bogard Press, we always depicted Jesus as wearing a white robe with a blue sash. Other people think they see His image on a pancake, tortilla or piece of toast. But truthfully, most of our impressions of the Lord’s appearance are rooted in the concepts of 16thcentury European artists.

The apostle John had seen Jesus face-to-face. He traveled, ate and drank with Him as he accompanied the Lord around Israel during His ministry. Although John was familiar with the Lord’s appearance, he saw Him in an entirely symbolic way in Revelation chapter 5.

One of the elders around the throne of God said to John, “Behold the Lion that is from the tribe of Judah, the Root of David, has overcome so as to open the book and its seven seals. And I saw between the throne (with the four living creatures) and the elders a Lamb standing, as if slain” (Revelation 5:5-6).

John saw Jesus as a Lion and as a Lamb. As the elder directed John to look at the Lion of the Tribe of Judah, he may have expected a kingly, strong and ferocious beast, but instead, when he looked, he saw a lamb. John saw, not just any lamb, but a sacrificed lamb.

So, what does that mean? The lion was majestic, picturing royalty, as the king of the beasts. The lamb was meek and mild, picturing the most innocent of the beasts. The sacrificed lamb reminded every Jew of Passover, when the perfectly guiltless, was slain, shedding its blood for the completely guilty.

What John saw in Revelation were the dual characteristics of Jesus Christ as Lion—royal, majestic, king-like and judging in His second coming; and as Lamb—innocent, yielding, and servant-like in His first coming.

At His first coming, John the Baptist described Him as, “the Lamb of God who takes away the sin of the world” (John 1:29). Jesus fulfilled the Messianic prophecy that read, “He was oppressed and He was afflicted, yet He did not open His mouth; Like a lamb that is led to the slaughter, and like a sheep that is silent before its shearers, So He did not open His mouth” (Isaiah 53:7). When the Ethiopian eunuch read this passage in Isaiah and asked, “of whom does the prophet say this?” Philip began from that verse and “preached Jesus to him” (Acts 8:34-35). Many years afterward, Peter wrote that we were “not redeemed with perishable things…but with the precious blood of Christ, as of a lamb without blemish and without spot” (1 Peter 1:19). Jesus came as an innocent lamb, to be slain as a sacrifice for our sins.

Then, at His second coming, Jesus will be “the Lion that is from the tribe of Judah” (Revelation 5:5). His origin and right to reign are traced to King David, of which Jesus is “the Root.” Isaiah described the “branch” and root from the stem of Jesse (Isaiah 11:1-2) who with righteousness “will judge the poor, and decide with fairness for the afflicted of the earth; And He will strike the earth with the rod of His mouth, and with the breath of His lips He will slay the wicked” (verse 4). The foundation of Jesus as the Lion of Judah was established centuries earlier, in Jacob’s words, “The scepter shall not depart from Judah, nor the ruler’s staff from between his feet, until Shiloh comes, and to him shall be the obedience of the peoples” (Genesis 49:10). The scepter was the symbol of kingly authority, and “Shiloh” was one who would bring peace. By inspiration, Jacob revealed the King of Israel who would bring real peace, would descend from the tribe of Judah.

Though their temperaments are the most contrasting of any two creatures in God’s animal kingdom, Jesus is both the Lion and the Lamb. However, in Scripture, the Lion is victorious because of the sacrifice of the Lamb. Salvation and victory over sin are through faith in “the Lamb of God who takes away the sin of the world” (John 1:29). There will come a day when “the salvation, and the power, and the kingdom of our God and the authority of His Christ” (Revelation 12:10) will actually come to this world. Then, victory will be “because of the blood of the Lamb” (verse 11).

Three years ago Big Daddy Weave sang a powerful song that sums up the message of the Lion and the Lamb:

6 thoughts on “The Lion and the Lamb”