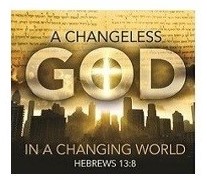 Many people are uncomfortable or irritated when changes come. I admit it. It annoys me when the products in my grocery store are moved to different aisles. It aggravates me when Apple installs a new Operating System, or Facebook changes their layout. But if I want to use their device or program, I am forced to learn a new method of operation.

We all tend to love things the way they are—with what we are familiar. However, after all the griping, most changes result in things working better than they did before. Altering the aisles of products makes you see merchandise you had overlooked. The new Operating System exterminates some bugs, and the new Facebook layout allows you to do more with your account.

Change is like that. What is often inconvenient and unwelcome, usually ends up improving what we do.

As the Christian looks at change, he must discern between things that are cultural—and changing, from things that are scriptural—and changeless. Cultural practices continually change—Biblical principles never change. To reach people with the gospel in our generation, methods must change—but the message must not.

The Apostle Paul is a great example in how to live with this tension. He was never willing to manipulate his message. But according to 1 Corinthians 9:19-23, he was more than willing to modify his method. He crossed the boundaries of his culture and traditions, to reach people who needed Jesus. He said, “I have become all things to all men, so that I may by all means save some” (verse 22). Paul was flexible in his appearance and actions, in order to reach people in different cultures. We too must break the bonds of our traditions and overcome the obstacles with the message of salvation. The barriers we face are culture, language, race, education, vocation, and economic and social issues.

If you attended a first century worship service in Jerusalem, or at Antioch, you would probably feel uncomfortable. Their singing, language, dress and expressions of worship were altogether different from ours. They did not meet for Sunday School at 9:45. Men and women sat separately in church. The person praying would most often raise his hands and look up, not close his eyes and look down. They worshiped God according to Scripture and their own cultural traditions, just like we do.

Styles of worship music, ministries, buildings and other tools for reaching people with the gospel, are in constant flux, because the culture continually changes. The words of “Amazing Grace,” sung to a well-known bar-tune, was unwelcome by some Christians early on. Years later, a disruption was caused when some churches broke with tradition, and brought “the devil’s instrument,” into use in worship. That musical instrument, the piano, had only been used in honky-tonks, barrooms and dance-floors.

Why did those Christians react so strongly? Why do we so often oppose change?

There is a danger in devotion to human traditions, personal preferences, styles, or systems. If your devotion and service is not based on Scripture commands, to hold them may actually cause you to disobey the God you are trying to serve. Jesus said the Pharisees, “made the commandment of God of none effect by your tradition” (Matthew 15:6). They were nullifying God’s commands by their devotion to human traditions.

So, what should you do when faced with change, especially in God’s worship and service?

Analyze your reactions to change. When confronted with a change regarding God’s house, worship, in music, style, ministry, outreach or behavior, that makes you uncomfortable, you must ask:

Am I resisting change for biblical reasons, or on cultural grounds? Are these new things violating Bible principles, or are they merely different than the way I was reared? There may have been nothing wrong with the traditions of your upbringing, but if they were not based on biblical principles, they are not binding.

If it is cultural, it is bound to change. If we are to impact people in our culture, we must speak their language and reach them where they are. This is what Jesus did, when He crossed a barrier of His own culture by saving a Samaritan (John 4), forgiving an adulterer (John 8), and commanding His church to evangelize every nation (Matthew 28).

If it is Scriptural, it must not change. The Bible is God’s fixed revelation to mankind—“Forever, O Lord, your word is settled in heaven” (Psalm 119:89). No true Christian seeks to change the message, but, like Paul, must adapt the message to the hearer.

Let’s seek a Biblical reaction to change and “above all these things put on love, which is the perfect bond of unity” (Colossians 3:14).