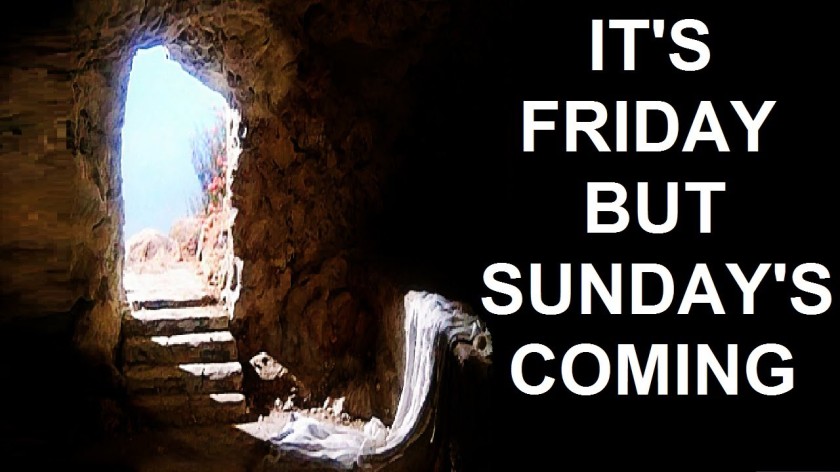 Pastor S. M. Lockridge (1913-2000), who pastored Calvary Baptist Church, a prominent African-American congregation in San Diego, California, is credited with originating the phrase, “It’s Friday—but Sunday’s Coming!” These words are the perfect answer for Passion Week. During that week Jesus was abandoned, rejected, tortured and mercilessly crucified. His body was laid in a borrowed tomb, but was gloriously raised from the grave on Easter Sunday.

The true meaning of Easter and the resurrection of Christ is a problem for some people. But for me, believing in the actual, bodily resurrection of Jesus Christ from the dead was never difficult. I cannot recall ever not believing it. The human impossibility of it; the uniqueness of it; and the implications of it, were not always comprehended. But I just figured, if God could make a living man from a pile of dirt, how hard would it be to restore life to someone who had died? Child-like faith is a wonderful thing!

From the strictly human viewpoint, however, death has a cold finality about it. As far as can be seen from the physical side, death is the end. It is a period, not a comma. When we stand helplessly on the sideline as death snuffs out life, it reminds us that giving and restoring life is far beyond any human power. Those obvious facts make the resurrection of Jesus Christ from the grave all the more important.

When that Sunday finally came, initial reactions to the news of Christ’s resurrection revealed not many were expecting it. The women who first came to the empty tomb, “found the stone rolled away” but were “perplexed” about it, until an angel told them, “He is not here, but He has risen” (Luke 24:2-6). The empty tomb surprised this sweet ladies auxiliary.

When Mary Magdalene, Joanna and Mary the mother of James told the apostles they had seen the risen Christ, “these words appeared to them as nonsense, and they would not believe them” (Luke 24:11). It was not pagan unbelievers who thought the news of the empty tomb “nonsense,” but the apostles of Christ.

Later in the day on Easter Sunday, when two disciples on the road to Emmaus encountered an unrecognized Jesus, they admitted their disappointment at the crucifixion of Christ. They acknowledged that some had seen the empty tomb, but they were puzzled by it all. You can feel the pain and sadness in their words: “But we were hoping that it was He who was going to redeem Israel” (Luke 24:21). Their confidence had been shattered by His death on the cross. Now they were at a complete loss. The Lord’s words of rebuke must have stung when He said, “O foolish men and slow of heart to believe in all that the prophets have spoken! Was it not necessary for the Christ to suffer these things and to enter into His glory?” (Luke 24:25, 26).

Despite the doubting disciples, the Lord Jesus made five appearances to a great number of followers on Easter Sunday, which convinced them He was alive. Later, Jesus appeared to hundreds of followers, as Luke noted, “He also presented Himself alive after His suffering, by many convincing proofs, appearing to them over a period of forty days and speaking of the things concerning the kingdom of God” (Acts 1:3).

What are the implications of Christ’s resurrection?

If Christ was not raised from the dead:

“If Christ has not been raised, then our preaching is vain” (verse 14).

“Moreover we are even found to be false witnesses of God” (verse 15).

“If Christ has not been raised, your faith is worthless” (verse 17).

“Then those also who have fallen asleep in Christ have perished” (verse 18).

If Christ was raised from the dead:

The resurrection of Christ declared Jesus to be God’s Son with power (Romans 1:4).

His resurrection gives His followers living hope! Believers have been “born again to a living hope through the resurrection of Jesus Christ from the dead, to obtain an inheritance which is imperishable and undefiled and will not fade away, reserved in heaven for you” (1 Peter 1:3, 4).

“It’s Friday—but Sunday’s Coming” reminds us that, no matter how gloomy things appear to be right now—Sunday’s coming! For Jesus, the agony of Passion Week ended in ultimate victory. His victory over death and the grave means that every believer in Christ will also share His triumph through eternal life He gives.

As we remember and celebrate His resurrection, let us rejoice that, “He is not here, but is risen” (Luke 24:6). Thank God—Sunday’s coming!