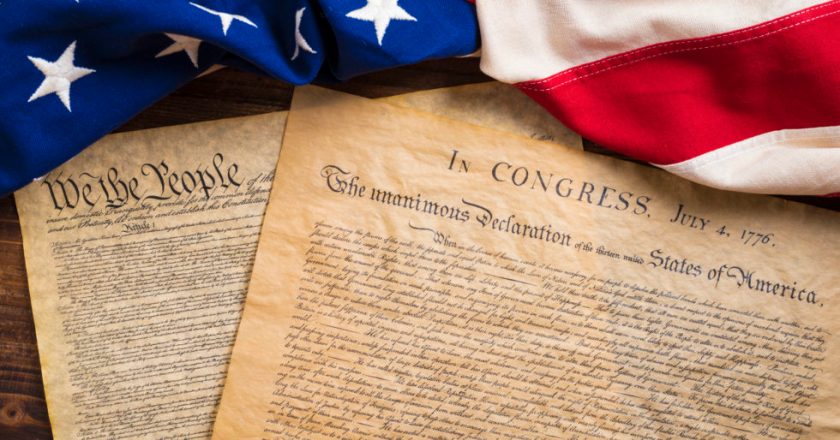 HAPPY INDEPENDENCE DAY! Every year on July 4, Americans celebrate the adoption of the Declaration of Independence on that date in 1776. Our nation is truly blessed of God!

The 56 men who signed the Declaration of Independence knew there would be great consequences and loss of life, if America truly gained independence from England. John Hancock stated, “We must be unanimous… we must all hang together…” to which Benjamin Franklin quipped, “Yes, we must indeed all hang together, or most assuredly, we shall all hang separately.”

In his research on the Signers of the Declaration of independence, Michael W. Smith noted that seventeen of the 56 signers saw military service in the Revolutionary War, and 9 were killed. Five were captured and tortured before they died. Twelve had their homes ransacked and burned.

Carter Braxton of Virginia, a wealthy planter and trader, saw his ships sunk by the British Navy. He sold his home and property to pay his debts, and died in rags.

Thomas McKeam was forced to constantly move his family from British pursuit. He served in the Congress without pay, and his family was kept in hiding. His possessions were taken and he died in poverty. The properties of Ellery, Clymer, Hall, Walton, Gwinnett, Heyward, Ruttledge and Middleton were vandalized and looted as well.

The home of Thomas Nelson Jr., was seized by British General Cornwallis and used as his headquarters in Yorktown, Virginia. During the Battle of Yorktown, Nelson quietly urged General George Washington to open fire anyway, destroying his home. Nelson died bankrupt.

John Hart was driven from his wife’s bedside as she was dying. Their 13 children fled for their lives. His fields and gristmill were laid waste. For more than a year John lived in forests and caves, returning home to find his wife dead and his children vanished. A few weeks later he died from exhaustion. Lewis, Norris and Livingston suffered similar fates.

Smith sums it up like this: “Such were the stories and sacrifices of the American Revolution. These signers were not wild-eyed, rabble-rousing ruffians. They were soft-spoken men of means and education. Their average age was 45. They had security, but they valued liberty more. Standing tall, straight, and unwavering, they pledged: ‘For the support of this declaration, with firm reliance on the protection of the Divine Providence, we mutually pledge to each other, our lives, our fortunes, and our sacred honor’” (www.michaelwsmith.com).

The United States of America is inseparably linked to the God of the Bible, no matter how much revisionist historians seek to sever it, and political correctness to deny it. The Christian roots of our nation’s founding, and biblical quotations of our country’s forefathers are carved in stone, set in glass, and forged in brass, as well as written on parchment.

Principles of character, justice, and soul freedom that America holds dear, came to the early colonies from the English Common Law, which was based squarely on teachings of the Bible. Early in American history, belief in the Bible resulted in concepts of human liberty, social benevolence, and the system of government and education, becoming part of the fiber of our nation. References to the Bible and to the God of the Bible are inscribed on hundreds of America’s founding memorials in Philadelphia, Boston, Washington D.C., New York City, and elsewhere across our land.

This week we celebrate the Declaration of Independence, which did just that—it firmly declared the American Colonies independent of—the authority and rule of Great Britain. This historical document states that the “Laws of Nature and Nature’s God” entitle the American nation of people to a separate and equal station among the powers of the earth.

The Declaration of Independence uniquely contains a theory of rights that depends on God, not man, for its validity. It states that, “all men are created equal, that they are endowed by their Creator with certain unalienable Rights, that among these are Life, Liberty and the pursuit of Happiness.” With these words the Continental Congress affirmed that the Creator gave people’s rights to them—not a monarch, an aristocracy or a government agency. Most historians agree that this wording—these rights—this statement of legitimacy—has no parallel in human sources. We see in these words a deep affirmation of the religious faith of our founding fathers.

What Thomas Jefferson and the contributors meant in these words were that the liberty God gave to man was not sourced in, or dependent upon, the permission or toleration of any human ruler or sovereign—but flowed directly from God the Creator, Himself. It was for this reason the Declaration stated that governments, “deriving their just powers from the consent of the governed,” are established. The result of this truth means that the people have the right, and even more, the obligation, to change or abolish a form of government that becomes autocratic or dictatorial.

In the closing paragraph, the signers appealed to “the Supreme Judge of the World for the Rectitude” of their intentions. They declared unashamed dependence upon God to validate the justice and righteousness of their cause, and without a doubt, He did! The United States of America came into being because of their commitment to principles of liberty and their reliance upon the God of the Bible.

God gives this great promise: “Blessed is the nation whose God is the LORD, The people whom He has chosen for His own inheritance” (Psalm 33:12). As Americans, let’s take God’s promise to heart and bring others to saving faith in Jesus Christ. May God continue His blessing on America! Happy Fourth of July!